… this is what I would design!

Don’t get me wrong I have no illusions about becoming a knitting designer, I love knitting as a passion not a job. Lee Meredith is a woman after my heart. Combining my 2 favourite things, ‘Colouring’ and ‘Knitting’, so bloody clever.

I love, love, love, what she has put together. The collection is fun and did I mention I love colouring in? There are blank charts for you to print out and get your colouring pencils on. I imagine it will be great to use up leftover yarns, and we all have those. I don’t know what I’ll make first, I’m spending some time marvelling at how lovely the presentation is and how I’m kicking myself for not thinking of doing it first!

I had a lovely Christmas Day, I hope you did as well.

Purl was spoiled by Santa (hint: I wasn’t Santa), and my 2 younger sisters (I was very touched they’d thought of her). Anyone would have thought 4 connecting tunnels in the hallway would be enough for any one cat, but clearly Santa thought differently and she now has 2 more in the living room. Purl also received mice, balls and this sweet personalised collar. For the record I didn’t purchase any of these things. 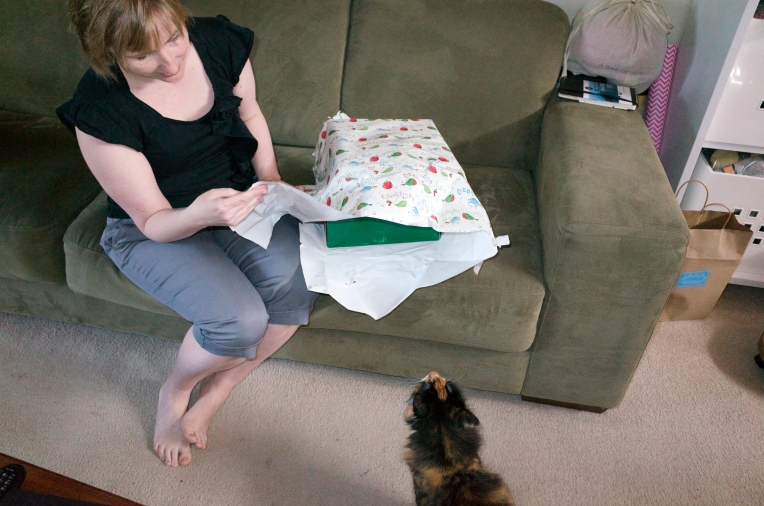 I also got some cat themed gifts… 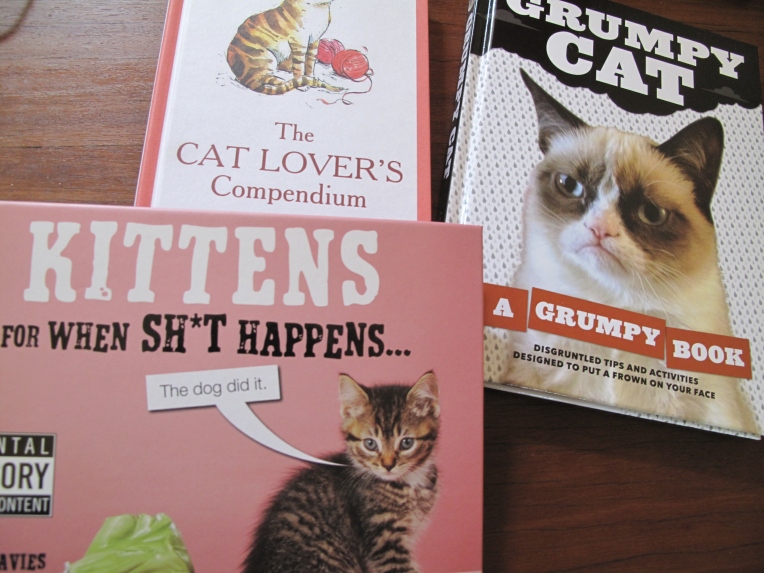 And some Cat pj’s from Peter Alexander. Looks like I’m beginning to be ‘easier’ to buy for, I even got yarn from my in-laws for KK! 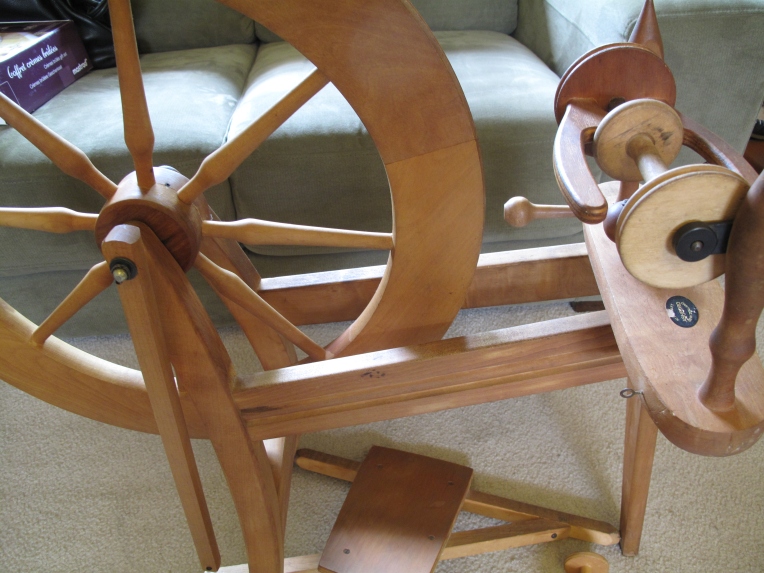 I got a new wheel!!! By the looks of it (and I’ve had a tinker already), it just needs a drive and brake band, a couple more bobbins and I’m in business! I was truly shocked and a little scared… this is my third wheel, could this be the beginning of my wheel collection? It wasn’t a collection until yesterday.

Under the tree was also some Twin Wollmeise in WD colour ways, because it’s not Christmas without Wollmeise… 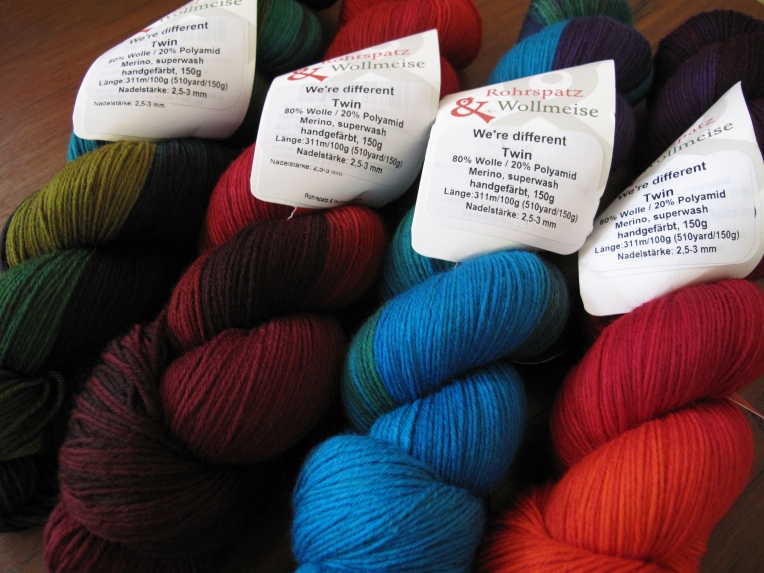 This will be Purl’s first Christmas with us. She is a little intrigued by all the paper wrapping and the boxes and all the new things to sniff out. I tried, oh how I tried to get the perfect ‘Christmas Cat photo’ and then have it printed onto cards and sent out this year. But I failed at the blocks, trying to stick a santa hat or some reindeer ears on Purl was a lot harder than I originally anticipated. Luckily Purl’s aunt (yes she has a real cat aunt) came to the rescue with this fabulous ‘Christmas’ collar. I think it sets off her whiskers quite nicely, don’t you? Butter wouldn’t melt in this cat’s mouth. She’s been naughty Santa, don’t believe that innocent, sweet face!

I had finished knitting my Romi ‘Jeanne’s cowl’ and my 15 stripe rainbow socks (need to take some photos) last week, and I was left without any knitting on my needles for almost 24 hours, it’s not often that happens. I remedied that by casting on ‘Featherweight’ by Hannah Fettig. I’m using Patonyle 4ply in Charcoal, I can only imagine just how much wear I’m going to get out of this cardigan. The gauge is 24 sts to 10cm, so it couldn’t possibly take me too long, right?

Wishing you all the very best for your Christmas Day, I hope it’s relaxing and joyous and Santa brings you lots of wool.

I have very little of a queue left on Ravelry, go on, I dare you to look…

Less than a page of long-wanted FO’s for me, is far less a burden than 22 pages x 30 queued items to knit. I suddenly feel light.

There wasn’t an easy way to diminish this list, I checked for help in the forums, and as far as I’m aware there isn’t that functionality. Removing 650+ projects took 2 keystrokes per queued pattern. I was determined. I was also watching TV.

The idea of letting go of this list, my must-have-in-my-lifetime list, was a little easier to bear by ‘favouriting’ projects I didn’t want to forget about. Surprisingly, I was able to let go completely of much more than I expected. I also re-found some wonderful things I had forgotten about, those were the the things I favourited or kept in the queue.

Ironically, I fear the same could be said of my yarn stash if I thought of  it as a burden, which I can tell you, I do not!

Romi Hill has released the first official pattern in her 7 small shawls year 4 today, I had a feeling it was coming, I’m currently finishing up the ‘free’ cowl which was the first pattern released. I’m knitting it in my hand-spun and I must say I’m loving it. I’m not sure that i’ll cast on this shawl straight away, it has beads so I kind of want to watch my ‘Knitting with Beads’ Craftsy class before I begin (a gift from Santa, so I can’t start yet).

I’ve also received the final instalment of the Cookie A sock club last week. I’m really pleased with the final package, and I hope to knit with at least one of the patterns some time in the future.

Another year on, and this should be the post about my Christmas tree and all of the amazing decorations I’ve knit and crocheted for it, supposedly. Oh how I wish I could surprise you all with the amazing things I’ve made for said tree. Sadly it’s not to be.

More important things happened this year, I got a cat.

I toyed with the idea of getting a decal of a tree to put against a wall, but instead I settled for a new tree, smaller, all-in-one, sit on the kitchen counter where the cat has yet to have leaped, and even she, knows her limits.

This year has taught me one thing, and here’s where I link it to knitting. Don’t plan anything, not a thing, because if you really wanted to do it / knit it / have it, you’d already be doing it.

I knit a lot of things for one of my nieces this year, not because I had planned it, but because I really, really wanted to do it. Here’s Whirligig Shrug by Stefanie Japel, my latest FO. I’ve yet to hand it over so there will be more gratuitous photos later. 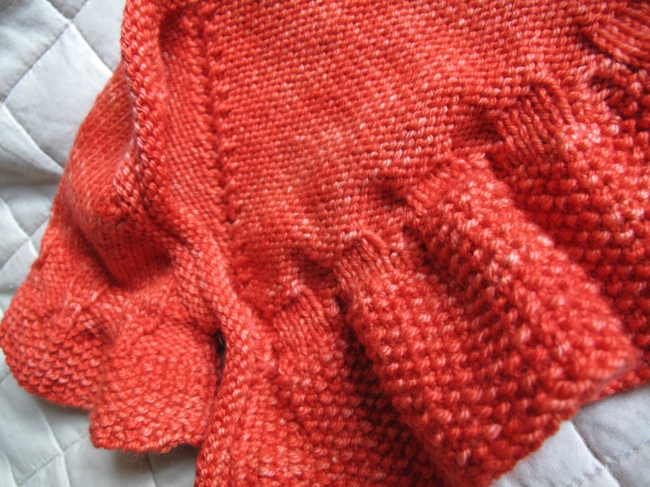 How does one delete a queue of 650+ projects on Ravelry in one go? I’m turning over a new leaf.